Is Social Security Going Away?

Since 1935, Social Security has been a factor in an American’s plan for retirement. Since 1954, people have also assumed the program would provide a livable wage if they became too disabled to support their families. However, in the current age, there is deep concern among Americans that Social Security will no longer be a realistic option for either financial situation.

Many people think the large number of Baby Boomers (the generation born in the years after World War II) reaching retirement age is stressing the Social Security System, allowing the system to go bankrupt. However, the actual problem with funding is the drop in the birthrate around 1965. Women began to average only two children a piece instead of three. In other words, instead of three workers feeding into the Social Security system, now only two worders pay into it, bringing revenues down.

The Future of Social Security Disability

The Social Security Administration says that the Social Security Disability Insurance program is increasing in costs and declining in income, threatening insolvency in 2023. At this time, the fund will only be able to pay out 89 cents for every dollar owed. The root cause is the growing number of people receiving benefits relative to the number of workers paying into the Disability Trust Fund. Also, the American population is aging, and people are more likely to become disabled as they become older. The number of SSDI beneficiaries per 100 covered workers is projected to grow by more than 40 percent between 2004 and 2030, from 4.8 to 6.8 per 100.

Politicians Will Protect It

The possibility of Social Security actually being totally defunded by Congress is unrealistic because politicians are, well, politicians. The fact that a large portion of the American voters depend on their Social Security income to retire or to support them in case of disability is never far from the minds of representatives and senators.

“Members of Congress like to get reelected, and if Congress voted Social Security out of existence, the likelihood of its members getting reelected would probably not be very good,” explained Stephen Goss, chief actuary of the Social Security Administration.

The responsibility of saving Social Security Disability lays on Congress. Several of their options include:

About one out of every three SSDI recipients is already living below federal poverty level. A cut in the scheduled benefits could mean very significant financial hardship for disabled people who depend on SSDI to protect them and their family from financial ruin. Whatever the solution chosen, there is no question that Congress must act to protect its citizens who have paid into this system with faith it will be there when they need it.
#SocialSecurity #SSDIBenefits #SocialSecurityDisabilityInsurance #Disabled

“Social Security Insolvency:  When and What to Do,” Forbes 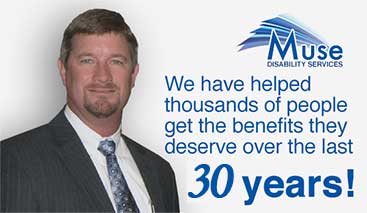 All of our representatives are accredited and proud to be at the top of their fields by participating in on-going legal education programs that improve their ability to further assist you in advocating for your claim. We welcome your inquiries and hope we can provide you
with the skilled, excellent services you deserve in your quest for benefits.

*Although we have several attorneys on staff, Muse Disability only represents itself as an advocate or representative for our clients cases.

Information on this website should not be considered legal advice. Further, there is no attorney client relationship established when you use the site or submit information in it.

The use of the words attorney and lawyer appear on these pages to help the search engines bring in traffic for someone seeking a disability advocate. We do this because many people do not understand that they may not need an actual attorney to help them with their case.